If today is your birthday you share it with famous explorer Felix ‘Cats’ Tibbit.

During the summer of 1908, Felix was part of an expedition striving to reach the North Pole.  All but Felix were lost in a terrible storm, but somehow he arrived at a small village of survival buildings set up by previous expeditions, his backpack and most of his clothes torn from his body by the cruel Artic.  The only inhabitants of the group of ramshackle huts were a colony of cats who were the descendants of pets left by other explorers.

After a few days in which he regained his strength, Felix realised that he had to get out of there and back to civilisation before the storms returned, and before he ran out of food.  But how would he survive outside of the shelter without full protective clothing?

He gathered as many of the stray cats as he could into the main hut where he blunted their claws and quickly strapped them to his body, four up each leg and each arm, one across his groin and six others around his torso.  Then he left the cabin and headed south.  At first, his passengers struggled and tried to scratch and bite but after a few days they settled down, hanging quietly as he trudged through the snow and eating dried fish and polar bear with him when he rested in the evening.

Eventually, on the edge of exhaustion, Felix staggered into the bar of a small town populated only by hunters, prospectors and whalers.
“Aargh, uuugh, mmmmm!” he shouted through frost bitten lips, his wild eyes peering from under the belly of his snow encrusted cat hat.

“Bloody Hell it’s the Abominable Snowman!” shouted the barman and grabbing his shotgun from under the counter, shot Felix dead.

“It was when the cat tied to his groin lifted its head and looked at me, that I started shooting,” the barman stated later.
How ironic that those who at first ensured Felix’s survival finally sealed his fate. 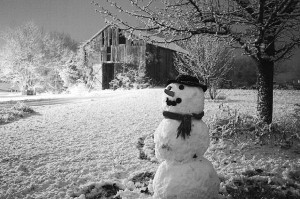