Firefighters have contained a large fire which ravaged a theme park at Universal Studios in Los Angeles.

A King Kong exhibit and a set from Back to the Future were destroyed and parts of a video library damaged.

The fire was found to be smaller than original estimates after fire crews discovered that they had been trying to extinguish film sets from ‘The Towering Inferno’ and ‘Backdraft’.

“It’s an easy error to make,” said Fire Chief Mike Lackson, “those sets are very realistic.  One of my men mistakenly gave the kiss-of-life to a cardboard cut out of Fay Wray before we dragged him off.  At least, I think that’s what he was doing.”

“We’d have put the fire out earlier but as quick as we were dragging out archive boxes of ‘The Waltons’ and ‘The Dukes of Hazard’, people were throwing them back in.”

A riot broke out amongst disappointed film fans when studio bosses announced that the fire will not delay the production of Bruce Willis’s latest film ‘The A Team’. 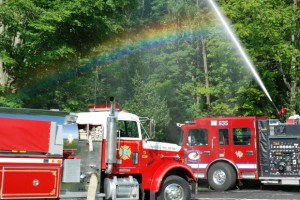 This entry was posted in News Around and tagged fire, los angeles, the a team, universal studios fire. Bookmark the permalink.