“So Fruitella 521, what have you discovered on your tour of Planet Earth?”

“The earthlings are a confused bunch, Spangle 10, they live short and fearful lives and have little understanding of the Universe around them.”

“How do so many live on one small planet, Fruitella 521?”

“Ten percent live very well and grow fat on ninety-percent of the wealth, the rest do what they can.  Many of them die young from hunger and disease.”

“Yes, those ten percent waste valuable resources on competing for material wealth, frippery and status.  The planet itself is under threat but because of their underlying, selfishness and their belief conflicts nobody cares to do much about it.”

“So I should press the Destruct button then?”

He stretches a slimy green finger towards a red button on the spaceships control console.

“There is one thing they share with us, Spangle 10.”

“Many of them love and care for a small carnivorous species of crepuscular mammal, valued for its companionship and its ability to hunt vermin.  It has been associated with humans for at least 9,500 years.  It is the animal we call Blackjack 28.”

“Blackjack 28!  Why, I have my own Blackjack 28 on this very spacecraft!  No species that has a relationship with such a noble creature can be all bad.  We will spare the earthlings now but check again in fifty years.  Let’s go, if we hurry we’ll get back to Planet Martins in time for the snooker on TV.”

A Blackjack 28 licking its leg. 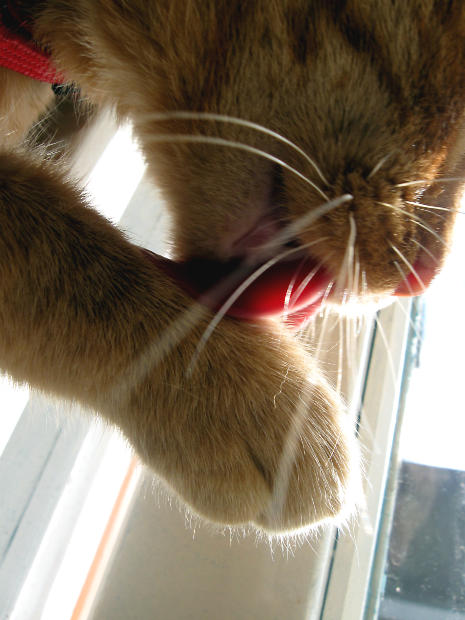 This entry was posted in Life on Mars and tagged alien, animals, cats. Bookmark the permalink.