Immigration Minister, Phil Woolas, was hit in the face by a custard pie thrown by a member of a pro-migration group.  A woman stepped on to the stage from the crowd and scored a direct hit from close range against the stunned Labour MP.

“The effect was enhanced as the pie was still in its glass dish,” said Mr Woolas.  “I’ve worked with clowns in the Labour party for years and I’ve rarely seen such an accurate placement.  The woman should be congratulated; in the World Custard Pie Championships she would have scored six points for that.

However, in the WCP Championships the pies used do not actually contain custard,” continued the Immigration Minister.  “Custard tends to ricochet which makes accurate scoring problematic so instead they are made to a secret recipe.”

When asked what any of this had to do with immigration Mr Woolas replied:

“Many people say that I am trying to dodge the serious issue of a numerical cap on immigration to the UK, but what I’m actually proposing is that people wishing to live in this country should compete for the few places available in teams of four, armed with ten pies each.”

Don’t worry about Mr Woolas, Gentle Reader, he will be okay, apart from the small scar on his temple.  If you look closely, you can see that it is the Pyrex glass trademark symbol. 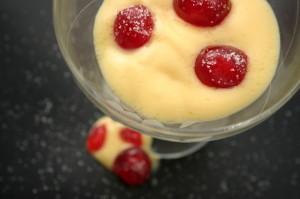 This entry was posted in News Around and tagged custard pie, immigration, woolas. Bookmark the permalink.