Britain‘s laziest man takes his dog for a walk while sitting in his car.  Kevin Pyle gets his son to drive him round the block while he leads four-year-old pet bullmastiff Bruce alongside.

Our reporter offered to interview Mr Pyle but he inferred by the use of two fingers that it was too much of an effort.  His son, Karl, answered on his behalf.

“Yeah, dad used to take the dog for a walk with the dog actually sitting in the car with him,” said Karl.

“And what happened then?”

“Well the dog kept farting so dad put him out the door window and dragged him by his lead and at first that worked fine.”

“Then one of the neighbours complained about the fur and that on the pavement so dad had to drop his speed from 30 to 5mph.

But Dad was getting bored with going slow so he got me to drive so he could relax, read the paper, and knock back a few cans.”

“So if you’re driving, why does your dad bother to come with you?”

“He’s only fourteen!  I’m not bloody irresponsible you know!” shouted Mr Pyle from the sofa.

“Hey, if you think the dog walking’s lazy, you should see how dad tops up the goldfish bowl!” said Karl proudly. 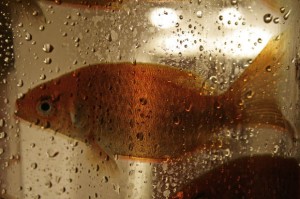 This entry was posted in News Around and tagged dog, lazy, walking the dog. Bookmark the permalink.