A letter written by Oliver Cromwell in 1642 has been unearthed in a council office.

An Essex council spokesman said: “In the letter, dated March 1642, Cromwell recommends a Captain Dodsworth for promotion.  Unfortunately, the letter was put in our ‘Pending’ tray by a 17th Century Council administrator and one of his successors has only just got to it.”

Other letters the council have just got around to opening include a note from Farriner’s Bakers in Pudding Lane, London dated 4 September 1666 stating, “I think I’ve left the oven on, please check,” and a 1939 letter from a Mister Adolph Hitler saying “Sorry about the bad feeling, let’s stop now before things get out of hand.” 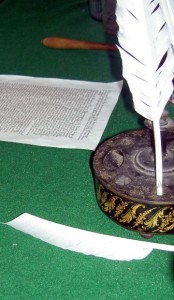 This entry was posted in News Around and tagged council, delay, letter. Bookmark the permalink.