An Arab country’s ambassador to Dubai has had his marriage contract annulled after discovering the bride was cross-eyed and had facial hair.  The woman had worn an Islamic veil, known as the niqab, on the few occasions the couple had met.
“This wouldn’t happen in a Western society,” said a spokesman from somewhere.  “In Glasgow, where I come from, we use alcohol to deaden our perceptions and enhance the beauty of the opposite sex.  I married a lovely girl whilst under the influence of sixteen bottles of Special Brew only to discover when I became sober, six months later, that it was actually my greyhound ‘Fast Henry’.  No wonder we were having trouble starting a family.”

An Australian performance artist has set a Guinness world record by swallowing 18 swords at the same time.  Chayne Hultgren, also known as the Space Cowboy, beat his own 2008 record by swallowing the swords.
At a press conference several journalists suffered lacerations to the lower body when Mr Hultgren bent to tie his shoe laces and later paramedics were called when it was discovered that he had become impaled on his chair after sitting down too quickly.
“It’s what we call a deep seated condition,” said somebody who may have been a doctor.  “To be blunt he’s going to have to carry a supply of corks and try and put all this behind him.” 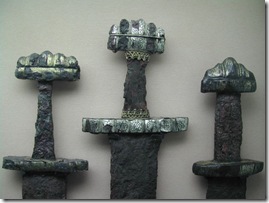