A day in the life

A man who was taken to hospital after being hit by a train had been knocked down by a car just a few minutes earlier.  Lewis, from Glasgow, Scotland, was hit by the train whilst walking his bicycle across a railroad bridge.  The driver of the train was distracted by a speeding fire engine and so failed to see him.

“I was walking my bicycle because I’d just been knocked off it by the explosion caused by my house being struck by lighting,” said accident prone Lewis.

“The car that hit me earlier was being driven by my doctor who was coming to my house to tell me that some recent medical tests had discovered a tumor in my chest.  His car hit me because I ran into the road to rescue my cat from under a speeding fire engine.

Ironically, the blow from the train seems to have dislodged the tumor in my chest and I’m now fully recovered.  Apart from the broken legs, of course.  And the hip.”

Later in the day Firemen reported that the cat was dead but they had managed to rescue his wife from the ruined house. 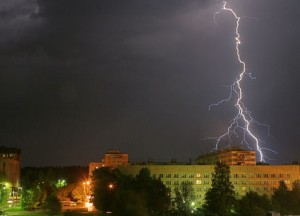 This entry was posted in News Around and tagged cat, luck, rail. Bookmark the permalink.