There was consternation at the 6th World Tango Championships in Buenos Aires yesterday when organisers discovered that 801 individual dancers from 23 countries had entered the event.

“How can we proceed with an odd number of contestants?” said chief judge Nysta Seeya, “Rule 25a clearly states that it takes two to Tango!”

Researchers across the world searched to find a way to avoid Rule 25a so that the Championships could continue.

“It takes two to Tango today, it will take two to Tango tomorrow, and (according to our records) it has always taken two,” said Pope Benedict XVI.  “Why do you think there were twelve disciples for God’s sake?”

“He’s correct,” stated the Dali Lama, “our Universe is built on four basic concepts, one of which is that a number of persons that is more than ‘one’ but less than ‘three’ must perform the dance known as ‘Tango’.

“Two there must be, before dance it you can,” said Yoda as at Ticket Refunds he queued. 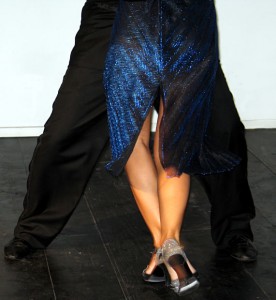 This entry was posted in News Around and tagged dance, tango, tango championships, yoda. Bookmark the permalink.