Ronaldo has been voted Football Player of the Year for the second time.

It’s probably because of those dazzling stepovers that confuse and torment opponents who just want to get on with the match.  I noticed that he tried a few of them during the game against Barcelona shortly before he missed that penalty.  Still, what’s impressive about kicking a dead ball into a goal from twelve yards?  I’m sure the fans are more interested in the stepovers.

If only they gave awards for good old-fashioned qualities like humility and honesty.  Surely the people that worship our great footballers would love them more if they occasionally said, “No, it’s okay Ref’, he didn’t foul me – I just fell over in a bit of mud.”

And how about ; “Yeah, the ball did hit his hand but my team all think it was an accident so we won’t be asking for a penalty.”

“We agree £44 is a bit steep for an authentic Man’ United football shirt so we’re going to bring down the price of the adults’ ones and give the kids’ version away for free.”

No, now I’m just being ridiculous. 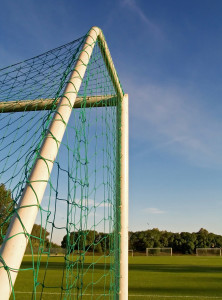 This entry was posted in Unlikely Reviews and tagged cheat, football, ronaldo. Bookmark the permalink.