The town’s traffic warden, ex-marine Drill Sergeant Hartman, has been on patrol again.  When I saw him yesterday, he was in discussion with Mrs. Ballvalve-Smythe, and he had a hand on her Mobility Scooter.

“‘S’cuse me ma’m but you don’t want to be leaving your buggy there now, do you?”

“If I didn’t want to leave my scooter there, I wouldn’t have left it there!”
She looked down her nose at Hartman by tilting her head back.
“Do I look like a fool to you, constable?”

Hartman realised he’d caught a fighter, but he wasn’t going to let her go, he’d faced Charlie on Hill 69, for God’s sake!
“I’m no ‘Constable’, ma’m!”

“Well, I agree you’re no oil painting.  Out of my way, young man, I need to buy cigars.”
“M’am you cannot pass until you park up your va – hear – cal in a correct and appropriate manner.”

“Constable, if you don’t get out of my way, you will regret it!”  She eyed him over the scooter in the same way that her grandfather had glared at the Zulus over the fences at Rorke’s Drift.Hartman instinctively moved his hand down to the place where his pistol once hung.
Unfortunately, Mrs Ballvalve-Smythe thought that he was stroking his groin and lashed out with her handbag.
“Stop, that this instant!  Help!  Help!  Pervert!”

Hartman caught by surprise, didn’t bother trying to duck, after all – how hard a blow could be delivered by a little old lady’s handbag?
Well, pretty hard actually, if she carries two half kilo glass jars of pickled onions in it.
The force sent Hartman reeling backwards, across the service road and into the town’s ornamental fountain.

Two teen aged boys sitting on the fountain surround, puffed pot smoke from within their hoodies and watched the scene with idle interest as Hartmann surfaced and swam towards them.  His manic eyes peered from beneath some waterweed that dangled from the flat of his head, as if he was recreating ‘Apocalypse Now’.

“You can take the man out of the Marines, but you can’t take the Marine out of the man,” sniggered Jason to Matt.
“It’s the meeting of two great civilisations, dude.  ‘The Empire Strikes Back’ versus ‘Jarhead’.” 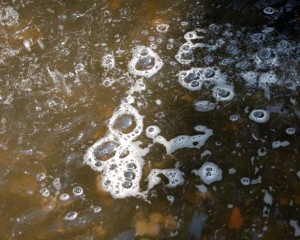