I had a stalker on the walk home from work last night.  One of those blue and yellow police helicopters was taking the same route as me across the town.  It kept flying in little circles and I could see the crew looking down at me.  I wasn’t concerned at first.  I was eating an ‘individual’ pork pie that I had bought for lunch but then decided to eat as a treat on the way home.  (What the hell is an ‘individual’ pork pie?  Has it no friends?  Has it a unique character all of its own?).

Moreover, I was on the way home from work, so everything was ok.

The police swooped lower for a closer look and I could lip-read what the observer was saying into his radio;

“He is wearing a black jacket and he has a bun.”

The Control Centre crackled back at him through his headphones.

“What do you mean ‘shoot to kill’?” shouted the observer,“He’s just some fat bloke!”

The pilot had heard some of that and I saw the machine gun at the front swing around to point at me.

Control was silent for a few seconds then sent another burst of static into his ear.

The megaphone on the helicopter came to life and bellowed down at me: “What sort of bun is that you are eating?”

Several other pedestrians were looking now.

“It’s a Melton Mowbray pork pie!”  I yelled, spaying crumbs from my mouth.  I waved the pie in the air.

The observer reported to control, “He’s a foreigner; I didn’t understand a word of what he said”.

Control gave him his orders and he relayed them to the pilot.

“We’ve got to leave him and go back to base; we can’t be seen to be harassing immigrants.”

“It’s a pork pie!”  I shouted at the retreating helicopter.

A little old woman who had been watching, glowered at me, “Bloody foreigners!” she muttered. 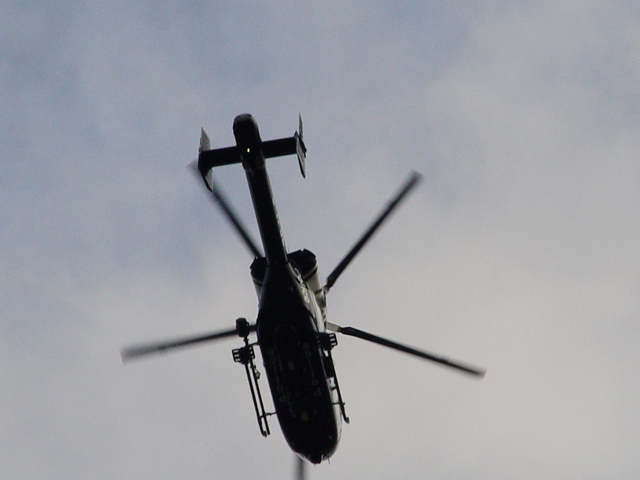