The film team from ‘Street Drink Crime UK Cops Wars’ are following our local constabulary as they go about policing the streets on Christmas Eve.  Constable Happening is sitting in his patrol car in the High Street when he receives an ‘Officer Requires Assistance’ call on his radio.  He addresses the camera with a serious face;
“When we get a call for help from another officer, we stop what we are doing and get there as fast as we can.”

He takes a sip on his coffee, “One day it might be us making that call.  As soon as Plenty finishes over there, we’re off.”

PC Plenty is in a shop doorway chatting with a skinny girl who is dressed in a short, black satin skirt, a transparent blouse and a fake leopard skin jacket.
“Is he going to have to let that prostitute go now?” whispers the film director.
“What prostitute?”
“The one he’s sharing the doughnuts with.”
“That’s not a prossie, that’s Dave from the ‘Booze Britain Undercover’ film crew, they’re making a docu-reality film series, just like you guys.”

Once Plenty is in the car they speed off to the Bombay Oyster, an Indian Restaurant where everything has just kicked off.  The microphone picks up the sounds of breaking crockery and furniture and the sounds of men fighting coming from inside the building.
“What’s the problem here, sir?” PC Happening addresses the owner who is cowering in the car park.

“The ‘Nigella Bites’ team were booked to film in my restaurant this evening and then the ‘Ready Steady Cook’ team turned up a week early!  There was a mild disagreement over the best way to serve stilton and then everything just kicked off!”
The owner is close to tears, especially once he spots the camera.

A Kenwood food mixer smashes through the window and fells a passing punter.

“Come on Mike,” Happening helps Plenty out of the car, “an Officer is in that Hell Hole and we’re the guys who have to get him out!”
They leave their doughnuts with the film crew and charge into the restaurant.
The sounds of violence increase for a minute, then stop.
There’s an ear piercing scream and the noise of fighting resumes.
Constables Happening and Plenty stagger out from the front door.
“Did you rescue the officer requiring assistance?” asks the director.
“Not bloody likely!” snorts Happening.
“Why not?”
“It was Officer Strident from the ‘Road Wars’ team, they’re our main rivals in the TV ratings battle.”
“So you’re not going to help him because he’s in a different TV series?”  The director is incredulous.
“A more urgent ‘Officer Requires Assistance’ has arisen,” Plenty says nodding towards his colleague.
Happening is nursing some tooth marks on his neck.
“Now I know why they call it ‘Nigella Bites’,” he says pitifully. 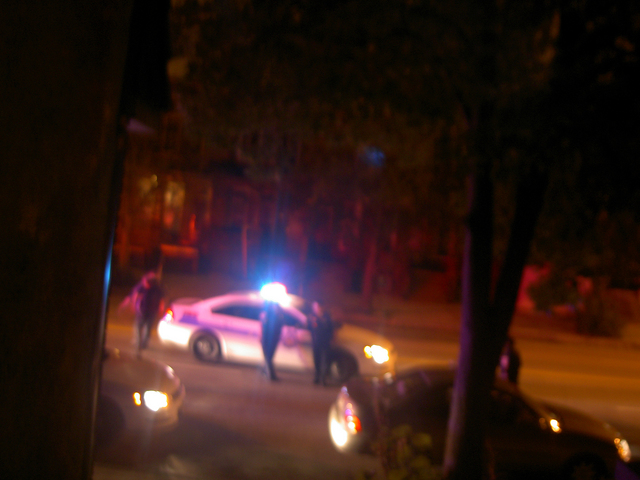