The Food Standards Authority has found that beef burgers sold by Tesco, Lidl, Aldi and others contain up to 29% horsemeat.

“That’s a huge surprise for us,” stated a Lidl spokesman, “we thought our burgers were 90% sawdust and newspaper.”

“We want to appear to care,” said a Tesco’s demi-god, “but we will sue anybody who suggests our ‘every little helps’ slogan is referring to the beef in our burgers.”

Later in the day further concerns were raised when burgers containing 100% horsemeat were found. The all clear was given once it became clear that the burgers were sold by a French supermarket chain under the brand name “Une bouchee de Cheval” with the marketing slogan “Get A Bit Between the Teeth”.

“Ze Engleesh, they make me laff,” sneered a passing French stereotype, “Zey eat ze pigs and za eels, but they get sniffy with ze cheval.”
Shortly afterwards he drowned in a vat of cold chicken fat whilst trying to avoid a runaway abattoir lorry. It’s along and ironic story that we will save for another news bereft day. 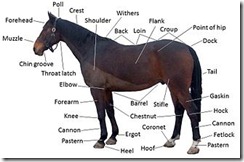 Technorati Tags: Horse,meat,burger,animals
This entry was posted in News Around. Bookmark the permalink.