What killed the dinosaurs

A koala that survived being hit by a car at 100 kph and dragged with his head jammed through the vehicle grill for 12 km has been dubbed Australia’s luckiest creature – despite being diagnosed with Chlamydia during his stay in animal hospital.

“Lucky” hung on during his ordeal with one arm and his trapped head until rescuers cut away the car’s mesh grill.

“Although Lucky was in shock, he quickly recovered,” said a hospital spokeswoman.

“I’ll say I was in bloody shock!” stated the furious koala.  “Chlamydia!

And they called me Lucky!  Being hit by a car and dragged twelve kilometres to a hospital where they discover you’ve got a bad dose of the clap isn’t what I call bloody lucky!

‘Lucky’ is a bullet bouncing off the pendant you wear over your heart, or finding you’re the only harem eunuch who still has his nuts!”

Statistics show that the world’s angriest animal is the koala, a vice hidden by the animal’s ‘pretty’ looks.  Koalas often spontaneously combust due to a build up of unreleased rage and that is why Australia has so many bush fires.

Scientists think this pent up anger stems from the fact that although named ‘koala bears’ they are actually marsupials, which means they originate from the planet Mars, named after the God of War.

When the air began to run out on Mars the koalas left and came to earth, where they defeated the dinosaurs and took up residence in Australia, the place most like their home planet.

All the pieces come together eventually, you see? 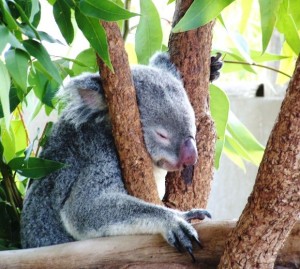 An angry beast about to explode.

This entry was posted in Unlikely Reviews and tagged australia, chlamydia, dinosaurs, koala. Bookmark the permalink.